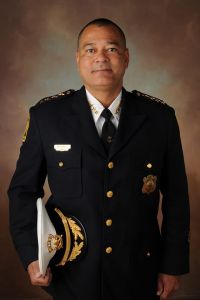 I first heard about the firing of Police Chief Jeffrey Blackwell at the delegates meeting of MARCC (Metropolitan Area Religious Coalition of Cincinnati).  Among this group of faith based community activists, this news was greeted with cry of dismay.

Over the past year, I have posted several times about Chief Blackwell and the department: Constitutional Policing, Cincinnati’s Ferguson Protest: a Personal View, and Cincinnati Deals with a Police Shooting.  I have the greatest respect for Blackwell’s vision for how policing should be done in this country. I had heard some grumblings about his self-promotion, but I was pleased that his ideas were getting more attention. He was often away, but I had assumed that a well run organization like the Cincinnati Police Department did not need baby sitting by its chief.

At a MARCC meeting (12/10/2015), Blackwell spoke of the need to replace that old policing model, “Big Me, Little You”, with one that valued and respected the rights of the citizens, and built up the relationship between the police and the community. What I did not know, could not know from my position on the distant outside, was that Blackwell did not apply these principles to his own behavior within the department.

I have read over the Cincinnati Police Department Climate Assessment.  I always view such reports with a grain of salt, especially when the outside organization confirms the point of view of the person that hired them. The organization, Make It Plain Consulting, has a good reputation, having been awarded “Emerging Business of the Year” by The South Central Ohio Minority Supplier Development Council. I find no evidence of bias in the report. It states that morale is low. It sites three areas of concern:

Though this last point cannot be addressed without appropriate budgetary support, the other two clearly belong on Chief Blackwell’s plate.

The memo from Harry Black, City Manager, where he announced to city council that he fired Jefffrey Blackwell “for cause”, paints an even darker picture:

Blackwell uses verbal abuse and insult to convey authority. Individuals have been threatened and berated, in the presence of subordinate officers, superior officers, and members of the public.

Equally disturbing, a culture of hostility and retaliation instituted by Mr. Blackwell has put the integrity of the police department at risk.

Black provides supporting documents written by current Assistant Police Chiefs and others.  Here is a sample:

Unfortunately, I believe the chief has little regard for the opinions and suggestions of his commanders. Instead, he relies on the counsel of his inner circle. The chief’s inner circle, which includes non-supervisors and civilians, is often allowed to circumvent the chain of command, leaving middle managers and command officers powerless. I believe morale among command officers is the lowest I have seen in my 27 years with the Department.

There is no doubt Chief Blackwell has excelled in community outreach. He is passionate in reaching out to the youth in our city and he strives to provide them with guidance and hope. Sadly, he has failed to do the same within our Department.

From the onset, Chief Blackwell essentially ignored recommendations from his command staff and instead set up an alternative advisory team who he considered as “loyal”.… The reward for the Lieutenants’ loyalty was unsupervised overtime and on call status city owned cars, which was the subject of recent investigative media reports.

When the Inspection Section attempted to conduct an overtime audit of the Quality of Life Team, Lt. Barb Young was told by the Police Chief they did not have his authority to conduct the audit and were told to cease auditing functions until told otherwise. Their Inspections Section office was immediately moved from the Spinney Field complex to the second floor of 310 Ezzard Charles Drive presumably for control or humiliation purposes. The unit was then later reassigned to report directly to Chief Blackwell.

Ironically, Chief Blackwell was able to opine on a national platform on how other cities should be conducting their affairs, when he was unable to communicate even a most basic operational plan or strategy to his own department. 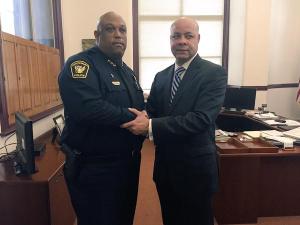 I have attempted to mediate the relationship between the Chief and Assistant Chief Bailey with little success. It has clearly deteriorated over the past two years and is sadly beyond repair.

There is plenty more, from Blackwell’s constant self promotion to his search for free tickets to sporting events.   He comes off as an arrogant ass.

Even Blackwell’s former supporters have turned. Scotty Johnson, past president of the Sentinels, an organization for black police officers, said in an email, “I have never witnessed such hostility and lack of respect for employees.”

In response to all of this, Blackwell has claimed “I’ve had the support of the White House, the attorney general, the national media…all of the national think tanks of policing, but I could never get the support of John Cranley or Harry Black, and because I’ve never had their support — ever — I was never able to command the department the way it should have been led.”

All this might be true, but the problems described in the report had nothing to do with his relationship with Mayor Cranley and City Manager Black.  The toxic work environment was his own creation.

I have concluded that the firing was indeed justified. I find myself in agreement with City Councilman Chris Seelbach:

I have supported Chief Blackwell and his approach to community policing from day one.

That being said, the statements outlined in the City Manager’s memo by respected members of our police department are concerning and not reflective of the many positive stories from officers and community members I have heard from.

What is most clear is that this is a sad day for the City of Cincinnati.