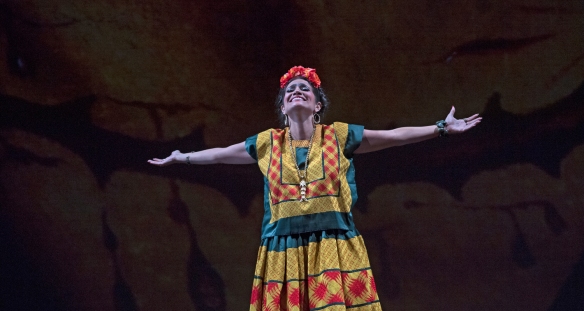 Oh the whole, I enjoyed the Cincinnati Opera’s production of Frida, based on the life of painter, Frida Kahlo. However, I left with decidedly mixed feelings, which is part of the reason this post was so long delayed.

Frida Kahlo is a character well suited to the operatic stage: her life was full of grand passion, physical pain, and high art. However, this opera often felt like a docudrama trying to give a complete view of the life of this remarkable woman.  The result often felt cluttered.  This was especially true in the beginning, which depicts Kahlo as a teenager.  As a dramatization, fewer scenes would have been better.

With its combination of modern classical and authentic folk music, its small orchestra, its informal sections of spoken word, and even its Communist politics, this opera by Robert Xavier Rodríguez is much in the tradition of Kurt Weil (before he migrated to Broadway).  The reference to Mexican folk music started with the very first sound in the overture, a solo chord from the accordion, and  permeated the much of the score.  In general, I thought the music was often effective, but, much like the plot, frequently seemed to lack focus.

The leads, Catalina Cuervo in the title role and Ricardo Herrera as her famous husband Diego Rivera, sang with power and expression.  They were completely believable in their characters.  Among the rest of the cast, the beautiful high voice of Jennifer Cherest, as Frida’s sister Christina, stood out.

After the opera, my wife commented that she welcomed the woman’s touch in the libretto (book by Hilary Blecher, lyrics and monologues by Migdalia Cruzby), especially in the perspective on sex. Indeed, there is scene which earned production an “R” rating, with Frida in the bathtub, wearing an outfit which I later learned was from “The Broken Column”, surrounded by lovers of both sexes.  Sitting in the back of the auditorium, my eyes (still recovering from surgery) were not good enough to see what was really going on, so I don’t really have much to say about this scene.

Otherwise, I found the staging very effective.  The set was on two levels, but the bones of it were quite simple.  When they were apart, Diego, the more famous painter of huge murals, was above, and Frida, the painter of more intimate self portraits, below.   Paintings of both artists were projected onto the set, which connected the action on stage to the art that is the reason we remember these people.

Musically, my favorite scene was the quintet in the second half.  Diego Rivera, who has had women parading through his bedroom for years, is accusing Frida of being unfaithful to him, with Leon Trotsky.  Frida is unapologetic  and emphasizes the intellectual aspect of her relationship with Trotsky.  Trotsky himself seems to be proclaiming innocence, but his rather dowdy wife is having none of that.  Meanwhile, above it all, Christina confesses to having betrayed her own sister.  Whereas I found the composition for much of the opera too cluttered, here all of the contrasting parts were integrated beautifully.  Rather than clutter, it felt like masterful counterpoint.

Another section that I thought memorable was the dance around Frida’s death bed.  Death was personified by three masked dancers who had appeared throughout the opera.  Unfortunately, the dramatic effect of this was eviscerated by the satiric dance of the monkeys which followed.  I thought the musical transition was lame, and the antics of the dancers were just not that funny.  Rather than providing comic relief after the intensity of what had just occurred, the monkeys, which do appear in many of Kahlo’s paintings, just added to my general feeling about the entire opera: it was trying to make sure to include everything, to the detriment of the drama.

This opera was in English, with occasional outbursts in Spanish.  This struck me as wrong.  An opera about a woman who was so defiantly Mexican, with so much Mexican folk music mixed in, cries out for Spanish.

Though I admire the staging and the singing, I left the opera with serious reservations. I thought the libretto and much of the music lacked focus.  However, I also left with a deep appreciation for the fierce intensity of this great artist, Frida Kahlo.  So, from that point of view, the opera has to be judged a success.