So, after much ballyhoo, the memo was finally released to the public.  Here are my thoughts.

I conclude that the FBI is doing its job, and that Trump and his Republican allies are not happy about it.  I knew this before the memo came out.

The Foreign Intelligence Surveillance Court does its work in secrecy and, as John F. Kennedy said, “The very word ‘secrecy’ is repugnant in a free and open society”.  This court needs supervision.  However, I find it hard to imagine our current congress providing any useful oversight. 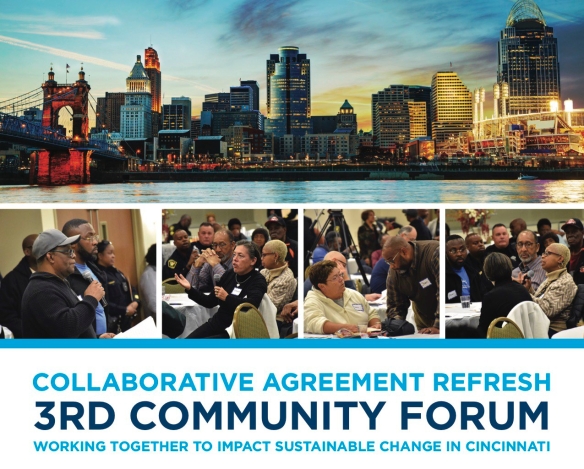 In society, nothing remains stagnant: either you work to get better or things deteriorate.  And so it is with the Collaborative Agreement among the police and various civic organizations in Cincinnati that emerged in response to the riots in 2001.  It had been voluntarily extended for over a decade, and people were beginning to suspect decay.  Consequently, the city has embarked on a refresh.  As a part of this effort, they held three Community Forums, “designed to solicit invaluable feedback from Cincinnati residents, Cincinnati police officers, and various community stakeholders on the state of local community-police relations.”  The last of these forums took place on Thursday, 1/11.

Unlike the first such forum last September, this one was lightly attended: I think police and other officials attending outnumbered the civilians, and there were many empty tables. 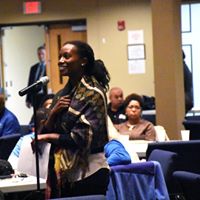 During the question period, one person attacked the panel for not getting the word out, in essence blaming the organizers for the poor attendance, especially from the population that is most impacted by the consequences of biased policing.  City Manager Black defended the organizers, citing a number of steps that they had taken, ending with “We can’t make them come.”

Though I had noticed the size of the crowd as soon as I entered the room, after a moment’s reflection, I was not surprised. It is much more exciting to rise up in anger over the shooting of Sam Debose than to sit and talk about procedures, accountability, data, problem solving, and recommendations to “develop metrics to evaluate mutual accountability…”.  It is all too abstract. Kim Neal, director of the Citizen Complaint Authority, told me that they even have trouble getting people who have registered complaints to return their calls.  If people are reluctant to engage in issues where their stake is personal, it is not surprising that they won’t bother with some city wide forum like this.

To me, the first forum seemed to feature lots of like-minded people of various backgrounds getting together for Kumbaya, but there was no grit.  I had trouble imagining this forum having significant impact, no matter how “invaluable” they called the feedback they received.  Regardless, it is important to give ordinary citizens the opportunity to participate.

Saul Green, who was appointed by the court to monitor the collaborative agreement when it was put in place back in 2002, is overseeing the refresh.  He is critically examining current procedures, and my impression is that he is not going to put up with pointless activities that have no real impact.  The team is making recommendations for change. City Manager Black is accepting them all, and forming concrete plans to implement them.

The specifics of these recommendations and the implementation plans would have been too numerous for presentation in this meeting, and are in any case not finalized.  Some in attendance were clearly dissatisfied, but what they were asking for was a level of detail that I, for one, had neither the time nor the expertise to evaluate.   I left this part of the presentation with confidence in the qualifications and engagement of the leadership, and I am willing to trust them to bring about constructive changes.

In my opinion, there is one major obstacle to a successful refresh: the reluctance of a certain segment of the police community to participate.  Initially, there were reports that the FOP (Fraternal Order of Police) voted “to stop taking part in the process of reviewing and renewing the Collaborative Agreement”.   Apparently, the FOP later backed off of this stance, but Hils, the FOP president, still points out “a big difference between looking at things and signing off on things.”  The rank and file police officers can undermine the agreement, no matter how carefully crafted the procedures are.   Perhaps a citizen forum is not the place for these police to air their point of view, and, to be honest, I might not be very receptive to what they have to say.  However, somewhere in this process, their concerns need to be heard and acknowledged.

At the end of the forum, they talked about PIVOT, “Place based Investigations of Violent Offender Territories”.  This is an awful acronym, but an effective program.  It won the 2017 Herman Goldstein Award for Excellence in Problem-Oriented Policing.  For me, this presentation had the kind of detail that meant something.  Instead of just talking about problem solving in the abstract, they presented the actual data, described the problems that it identified, and articulated specific steps taken to address the problems.

The highlight of the evening was the video documenting the problem and the community response in East Westwood and Westwood. These adjoining neighborhoods had narrowly defined locations where many crimes were being committed.  The response to the problem involved not only significant policing, but also collaboration, though the Neighborhood Enhancement Program, with other city departments and various community groups.  Unlike in some “broken windows policing” scenarios where citizens feel harassed and disrespected, here then citizens felt involved and empowered.  The result was that crime in the area was significantly reduced and life in the community improved.

In many parts of our country, policing mixes comfortably with the legacy of racial discrimination, harking back to a time keeping order meant, in part, keeping the coloreds in their place.  Far too often, the police will deny that racial bias is a problem in their department.  In the aftermath of the riots in 2001, Cincinnati confronted reality head on and found a constructive path forward, embodied in  the Collaborative Agreement. At the forum, I talked with a lieutenant with 25 years of experience who spoke with pride in the transformation that had occurred in the department since she first joined it.  However, pride in past accomplishments is never sufficient.  In Cincinnati, civic and religious organizations are working together with the police department and the city government to continue to improve.  The refresh of the Collaborative Agreement, with its focus on metrics and procedures, is only part of what is going on.  People are also developing innovative strategies like PIVOT and the Neighborhood Enhancement Program to confront the problems of a city in the 21st Century.  These strategies recognize that policing, no matter how innovative and well meaning, cannot provide the whole solution.  It is the whole community, working together, that can solve the problems we face.